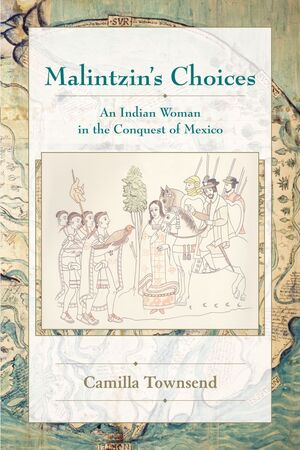 MALINTZIN'S CHOICES AN INDIAN WOMAN IN THE CONQUEST OF MEXICO

Malintzin was the indigenous woman who translated for Hernando Cortés in his dealings with the Aztec emperor Moctezuma in the days of 1519 to 1521. "Malintzin," at least, was what the Indians called her. The Spanish called her doña Marina, and she has become known to posterity as La Malinche. As Malinche, she has long been regarded as a traitor to her people, a dangerously sexy, scheming woman who gave Cortés whatever he wanted out of her own self-interest.

The life of the real woman, however, was much more complicated. She was sold into slavery as a child, and eventually given away to the Spanish as a concubine and cook. If she managed to make something more out of her life--and she did--it is difficult to say at what point she did wrong. In getting to know the trials and intricacies with which Malintzin's life was laced, we gain new respect for her steely courage, as well as for the bravery and quick thinking demonstrated by many other Native Americans in the earliest period of contact with Europeans.

In this study of Malintzin's life, Camilla Townsend rejects all the previous myths and tries to restore dignity to the profoundly human men and women who lived and died in those days. Drawing on Spanish and Aztec language sources, she breathes new life into an old tale, and offers insights into the major issues of conquest and colonization, including technology and violence, resistance and accommodation, gender and power.