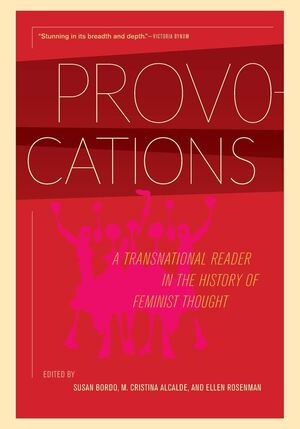 PROVOCATIONS : A TRANSNATIONAL READER IN THE HISTORY OF FEMINIST THOUGHT

The first collection of its kind, Provocations: A Transnational Reader in the History of Feminist Thought is historically organized and transnational in scope, highlighting key ideas, transformative moments, and feminist conversations across national and cultural borders. Emphasizing feminist cross-talk, transnational collaborations and influences, and cultural differences in context, this anthology heralds a new approach to studying feminist history.

Provocations includes engaging, historically significant primary sources by writers of many nationalities in numerous genres?from political manifestos to theoretical and cultural analysis to poetry and fiction. These texts range from those of classical antiquity to others composed during the Arab Spring and represent Asia, the Middle East, Latin America, Western Europe, and the United States. Each section begins with an introductory essay that presents central ideas and explores connections among readings, placing them in historical, national, and intellectual contexts and concluding with questions for discussion and reflection.