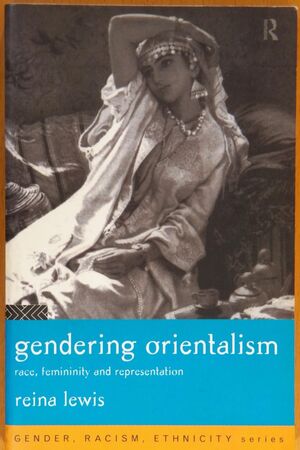 In contrast to most cultural histories of imperialism, which analyse Orientalist images of rather than by women, Gendering Orientalism focuses on the contributions of women themselves. Drawing on the little-known work of Henriette Browne, other `lost' women Orientlist artists and the literary works of George Eliot, Reina Lewis challenges masculinist assumptions relating to the stability and homogeneity of the Orientalist gaze.
Gendering Orientalism argues that women did not have a straightforward access to an implicitly nale position of western superiority, Their relationship to the shifting terms of race, nation and gender produced positions from which women writers and artists could articulate alternative representations of racial difference. It is this different, and often less degrading, gaze on the Orientalized `Other' that is analysed in this book. By revealing the extent of women's involvement in the popular field of visual Orientalism and highlighting the presence of Orientalist themes in the work of Browne, Eliot and Charlotte Bronte, reina Lewis uncovers women's roles in imperial culture and discourse.
Gendering Orientalism will appeal to students, lecturers and researchers in cultural studies, literature, art history, women's studies and anthropology.